Facts about Mount Merapi 1: The Name

The name of merapi could be loosely translated as the mountain of fire. The etymology of the name originated from Meru-Api, from the Javanese combined words, Meru means “montain” and api means fire.

Facts about Mount Merapi 2: The Geological History of Mountain Merapi

The mountain is located at subduction zone, where the Indo-Australian Plate is subducting under the Sunda plate. Mountain Merapi is one of at least 129 active volcanoes in Indonesia. The eruptions of Merapi began about 400,000 years ago. Since then, eruptions have become more explosive, with viscous andesitic lavas often generating lava domes. 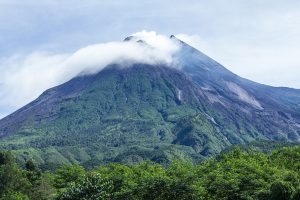 In 1006, the very large eruption of Mountain Merapi was claimed to have covered all of Central Java with ash. The volcanic devastation is claimed to have led to the collapse of the Hindu Kingdom of Mataram; however the evidence from that era is insufficient for this to be substantiated.

The increased seismicity at more regular intervals and a detected bulge in the volcano’s cone indicated that fresh eruptions were imminent in April 2006.

The active lava flows had begun by early May.  About 17,000 indigenous were ordered to be evacuated from the area and on 13 May 2006, Indonesian authorities raised the alert status to the highest level.  A 6.3 magnitude earthquake struck roughly 50 km southwest of Merapi, killing at least 5,000 and leaving at least 200,000 people homeless in the Yogyakarta.

In the late October, there are a reported that a pattern of increasing seismicity from Merapi had begun to emerge in early September.

Facts about Mount Merapi 8: The Eruption Activity of Mountain Merapi in October 2010

The Indonesian government raised the alert for Mount Merapi to its highest level and wanred villagers in threatened areas to move to safer ground on 25 October 2010. Officials stated that about 500 volcanic earthquakes had been recorded on the mountain over the weekend of 23-24 October.

On the morning of 11 May 2018 a phreatic eruption began. This affection to the Adisutjipto International Airport because of the eruption’s ash plume.

There are about 90 units from the total 258 units of sand barriers were damaged.

Do you love reading the facts about Mount Merapi?