You will be informed with large rays on Facts about Manta Rays. The width of M. Birostris is around 23 feet or 7 meters. Therefore, it is called as the largest species of manta rays. The smaller manta ray is represented by M. Afredi, which has the width of 18 feet and 1 inch or 5.5 metres. Both of them have the forward-facing mouths. The cephalic fins resemble the shape of horn. Moreover, the pectoral fins have triangular shape. Let me show you other interesting facts about manta rays below:

Manta rays are included in the family Myliobatidae. Other members include rays and sharks.

Manta rays can be found in the tropical, subtropical and temperate waters.  The coastal one includes M. Alfredi, which tends to reside in the area. On the other hand, M. birostris like to live in the open waters. 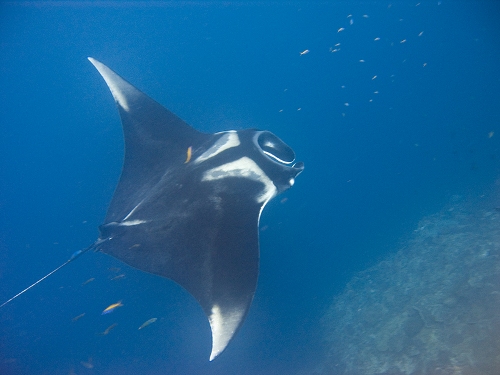 The gestation period of manta rays is around one year. After that, they will generate live pups.

Facts about Manta Rays 5: the status

Manta rays have the status as vulnerable animals according to IUCN. The population of manta rays is threatened because of direct harvesting, entanglement in fishing nets and pollution. The Chinese medicine often employs the gill rakers taken from manta rays.

Facts about Manta Rays 7: the study about manta rays

The lack of study about manta rays is caused by its big size.  Only a few aquariums are capable to hold this big fish.

Manta rays swim in a straight line and constant speed when they are deep underwater. When they are in a group, they like to have a leap.

The exact explanation why manta rays breach is not known until today. Some experts believe that it is used for removing parasites, birthing, mating or communicating.

Facts about Manta Rays 10: where to find manta rays

From spring to fall, manta rays can be found on the coastal areas. During the winter season, they will like to stay offshore.

Related to 10 Facts about Manta Rays

This article will reveal the 10 cool facts about Megalodon. Megalodon… Read More…