Trainor was born on December 22, 1993 in Nantucket, Massachusetts. She was a daughter of Kelly Anne and Gray Trainor. She had a big brother called Justin.

Trainor began singing at the age of six. She started singing with her father at the church. At age 11, Trainor told her father that she wanted to become a recording artist and started writing songs. At the following year when she was 12, she began performing as part of Island Fusion, an “all-purpose party band”. 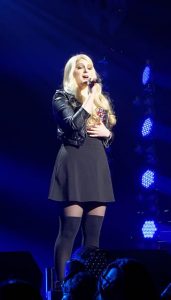 Trainor started to aired three albums of material she wrote at the age around 15 and 17.

During the summers of 2009-2010, Meghan Trainor enrolled in the summer performance programme at the Berklee College of Music. Then on April 16, 2010, Trainor released “Take Care of Our Soldiers”. Moreover, in 2011, she released two acoustic albums, I’ll sing with you and Only 17.

In 2012, she graduated from Nauset Regional High School. On April 24, 2012, her second single Who I wanna be was aired to public. She travelled to Nashville, New York and Los Angeles, where she would write and help produce country and pop music throughout 2013.

Trainor and Kadish wrote the famous single “All about That Bass” in 2013 and released in February 2014, which immediately led to her signing a deal with label. Her major debut Title that released on January 9, 2015 led her the 13th female artist with q debut number 1 song and album. On March 3, 2015, Trainor aired the next single Dear Future Husband.

Her first single on the album thank you titled No, was produced by Ricky Reed released on March 4, 2016 not long after she got the Grammy Award for Best New Artist. Her single I’m lady released on February 24, 2017 and it became a Smurf film soundtrack.

Through the interview with Entertainment Tonight, Trainor said that her third studio album was finished, and it is really special because entire her family sings on every song.

Facts about Meghan Trainor 9: The Influences

James Brown is one of her inspiration as the musician. Moreover, as a songwriter, Trainor is influenced by songs performed by Sinatra.

Her sound is characterised as “Neo-Retro, a mix-mash of R&B, pop, doo-pop and blue-eyed soul.

Related to 10 Facts about Meghan Trainor

what do you think after heard Michael Buble, this article would… Read More…

In this article, you can find 10 facts about Metallica. Metallica… Read More…

10 facts about Melanie Martinez will be presented in this article.… Read More…

10 facts about Megan Nicole will be told in this article.… Read More…